The crane is a majestic bird that is a favorite subject in many Asian paintings. Although there are many species of cranes, in Asia it’s usually the red crown crane that is depicted.  The long white neck and torso, contrasting black legs and head is topped with a red crown.  Their physical beauty is undeniable..  According to Wikipedia, the crane is the world’s tallest flying bird.

In Japan, the crane or tsuru, is a national treasure. It is the symbol of longevity and good luck because it was thought to have a life span of a thousand years.  Tsuru are also monogamous, therefore, often used for wedding decor.  An example of this is seen on formal wedding kimonos, and the uchikake, a decorative kimono that goes over the actual kimono, where beautiful images of tsuru are often embroidered.

Another example of the crane used in Japanese culture is the 1,000 origami cranes called senba zuru. As the story goes, during WWII,  Sadako Sasaki, a young victim of the atomic bomb in Hiroshima, was diagnosed with leukemia from exposure to radiation.  There are many versions of her story; one says she decided to fold 1,000 paper cranes as a symbol of peace and hope but was only able to fold 644 before she died of her injuries.  Another says her friend folded the cranes for her in hopes of her recovery.  Regardless of who folded the cranes, today people of Japanese ancestry as well as many others, carry on the tradition of folding 1,000 cranes in hopes of health, happiness, and peace.  There is a memorial statue of Sadako at the Hiroshima Peace Memorial Park with her holding a single crane.  My maternal grandmother is from Hiroshima and we still have relatives there today.  They were fortunate and were not harmed by the bomb. 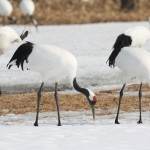 There is a Japanese idiom that says, “tsuru no hito koe“, 鶴の一声 or つるのひとこえ, which literally translates as, “one word from the crane’, meaning the “voice of authority”, the one who has the final word that isn’t challenged.  That is how high the crane is regarded, no one questions his opinions.

Similarly in China, the crane is the most popular bird symbolizing longevity and auspiciousness. The Chinese also embroidered cranes on their clothing and their images are seen in many ancient paintings as they also represent happiness and a soaring spirit, capturing the beautiful way it soars through the skies.

My book with Dr. Hsu!