The last six months have been a real learning experience for me.  My feng shui master, Dr. Hsu, has taught me many new insights into feng shui and clarified many misunderstandings that I had.  He has explained to me how some of these gadgets and cures came into use.  Most have come from Chinese culture. 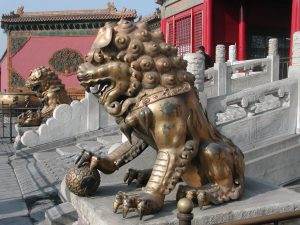 So I thought about the Chinese Fu Dogs also called Guardian Lions.  These lions or dogs are symbols or wisdom, power and protection. In Asia, they are often seen in front of palaces, temples, office buildings, hotels and shops. In the U.S. they are commonly placed at the entrances of a Chinese restaurant. They always are displayed in pairs, one male and one female. The male has a ball under his paw to represent the world and guards the structure and the exterior world while the female has a cub under her paw and protects those in the house, or the family. When you stand in your doorway looking out to the road, the male is placed on the left and the female is on the right. 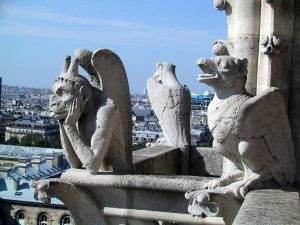 This is similar to the European gargoyle.The gargoyle originally was a grotesque figure used as a water spout on the exterior of the house that was used to scare off evil spirits.It was a guardian of the house.Over time, the gargoyles got uglier and more elaborate, and some even had wings.When my kids were little they used to watch an animation called “Gargoyles” which I found rather entertaining!However, these characters didn’t look quite as grotesque as it was, after all, a childrens program.

What is similar to the fu dogs and gargoyle is that they are both very scary looking guardians. Growing up I remember my parents had fu dogs in the house and they used to frighten me. Since I’m a bit of a scaredy cat, I would always avoid looking at them. Gargoyles are just as frightening to me. What I am trying to get at is that many cultures have similar ideas of a symbol that protects the home or structure. Fu dogs and gargoyles are particular to their cultures and therefore this is not a feng shui cure. It is a cultural practice. So, it is best to follow your own culture and not to follow the crowd.