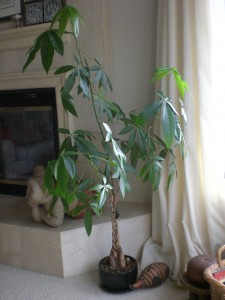 There are two definitions of “money tree”. One is a tree from Chinese mythology and the other is an actual physical live plant that is commonly sold under a commercial name “money tree”.

According to Wikipedia, during the Han Dynasty, the mythical Sun tree decorated with gold coins, was a symbol of affluence, nobility and auspiciousness.  In the tombs from the Han Dynasty they have found bronze and green ceramic “money trees”.  Some believed that when the deceased traveled to the next world, they could use the money for the journey.

The live plant, commonly referred to the money tree is called the Pachira Aquatica or Malabar Chestnut. The leaves are flat and long and resembles paper money.  Many of the trees you see for sale on the internet have several stems that look woven together.  According to Wikipedia, in 1986 a clever Taiwanese man, cultivated five stalks and braided them together, so it is a rather new “idea”.

In feng shui, trees and plants are all good regardless of what species they are. Some feng shui schools regard the “money tree” to symbolize financial good fortune and like to display them in their offices and homes.  I read somewhere on the internet that the money tree is lucky because it has seven leaves.  Well, mine only has six, so you really can’t believe everything you read.   It just boggles the mind when people state things like that when it’s so easy to disprove.  However, if you see a healthy money tree and it makes you feel that good fortune is coming your way, by all means get one!  The mind is a powerful tool and beliefs can manifest.

While visiting a friend who was packing up to move to a different state, I noticed she had two lovely money trees in her home.  So I said, “Oh, your money trees are looking great!”.  She offered to give me one because she promised her sister-in-law one as well.  Lucky me!  Now, my money tree sits in my “energy” corner where it gets the best indirect sunlight.  It seems to like that spot because it has been sprouting new leaves!  Am I superstitious???