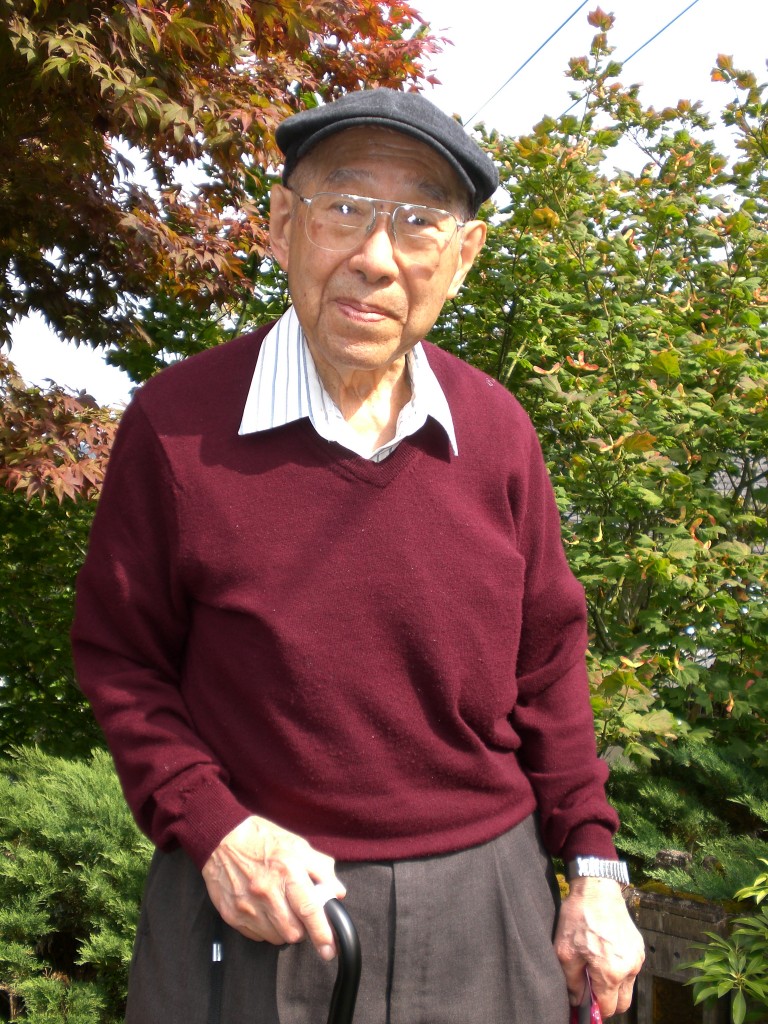 Mr. Hori today in front of his home

Sanjiro and Toyo Hori had four children:  Toyome born in 1916, Takashi (1918), Fukashi (1921) and Aiko (1926).  Although, they lived in America, Takashi, as the first born son in a Japanese family, was responsible to carry on the family business.

The meshiya that Sanjiro bought was located in a typical old shop house in Japantown with the business in the front and living quarters in the back.  In this particular shop house, the upper floors were rooming houses or what they called hotels. Their meshiya, named Iroha, was on the main road of Japantown and the Hori family lived in the back room that had a bed and hot plate.  If you ever watched the old Japanese traditional samurai dramas, you can imagine what these diners looked like.  Simple wooden tables and chairs, with the menus written on paper stuck to the walls.  It was homey and comfortable but wasn’t particularly ideal to raise a family.  Because the place had a draft, Toyo often had to take the children to the doctor because they kept getting sick.  This doctor suggested they rent a room upstairs at the rooming house and in doing so, the kid’s health improved.

Sanjiro ran the meshiya with his partner while Toyo pitched in as waitress.  The kids were too little to help, so their playground was the streets, alleys and vacant lots in Japantown.   During the off-season of labor, the Japanese men would come to Seattle and spend most of their time and money at the meshiya; playing cards, drinking, socializing and taking a well deserved break. The many single young men who frequented the meshiya were always kind and generous to the kids, often giving them a few cents to buy candy.  These places were a home away from home and they were a very close community.

Takashi and the other Japanese children in Japantown first learned English when they entered elementary school at Bailey Gatzert Elementary on 12th and Weller Street.  This was their first exposure to not only to the English language but to American food as well.  At the school cafeteria there were all these foods he had never tried before.  He mentioned one particular dish that sticks to his memory; canned peaches with cottage cheese.   With its bright orange glossy color, topped with white fluffy cottage cheese., it looked so appetizing.  Unfortunately, the texture and taste of the cottage cheese was just so bizarre to Takashi that he couldn’t eat it!

Another memory of his early days of elementary school was of Taiji, a Japanese boy in his class.  Most of the children attending Bailey Gatzert were of Japanese or Chinese descent, and many had no English knowledge.  But Taiji didn’t live in Japantown like the majority.  He lived in an area with American neighbors so he understood more English than his classmates.  On the first day of class, the teacher asked if anyone could share what they did over the summer holidays.  Taiji proudly raised his hand to answer as the others watched impressed with his comprehension of English. He went on to describe his family vacation whereby they stayed in a “hoteru”.  His English wasn’t very good at the time and the teacher had no idea what he was saying because his pronunciation was poor.  She didn’t know he meant “hotel”.  In the end, he seemed more embarrassed than the rest of them.  Poor boy!

After school, the Japanese kids walked down the street to the Japanese School, where they learned Japanese reading and writing from 4:00pm to 5:00pm, except for the summer months when it ended at 5:30pm.  The teachers were mainly wives of the Japanese laborers, but the students were quite disrespectful.  In fact, he recalls that they threw stones at the teachers! I don’t know how they got away with this in a Japanese environment which I thought had to be really strict!  What a different image he paints!  I asked Mr. Hori if the parents knew about all this.  As you can imagine, life was much harder in those days and everyone was so busy working to make ends meet that the parents and the kids lead separate lives.  He said, compared to today, they were more independent from their parents as that was the norm.

For the kids, the big entertainment was the movie theatre;  the Jackson Theatre was 5 cents and the Atlas Theatre was 10 cents.  All his buddies would gather pennies until they had enough money to send one guy inside.  This designated boy would then go to the bathroom and open the back door to let the rest of the gang in!  But most of their time, the kids just played on the streets as there were few cars and just some horses with stables on 4th and Washington.

When Takashi was ten years old, his mother decided it was about time she went home to Kumamoto to visit her family as she had been away for ten years.  With Sanjiro busy with work at the meshiya, they couldn’t all go.  Furthermore, it was a major expense in those days.  So, the boys stayed with their father in Seattle while Toyo took both girls back to Japan with her.  When it was time to return, Toyo promised her parents that she would visit in a few years but they refused to believe her.  How many of their friends and relatives had their promises broken and never saw their children again!  It was too difficult to see them go again.  In order to make sure their daughter would return, her parents decided to keep their granddaughter, his sister Toyome, who was twelve at that time.  To convince her daughter to stay in Japan, Toyo promised to fetch Toyome upon her graduating jyo gakko, which would be our equivalent to high school.  Hence, mother and baby sister Aiko, returned home to Seattle without Toyome.

Over the years, Takashi kept in touch with his sister through mail. At first, her letters would be written in English and gradually they switched to Japanese.  Many years later, Mr. Hori said he thought about his sister in Japan during those young teenage years and how difficult it must have been for her to adjust to a Japanese school.  Just for her to catch up on all the reading and writing and being able to graduate with her classmates was a feat in itself.  But, to live without her parents and siblings must have been so very hard.

In the meantime, Sanjiro sold the meshiya and went into the apartment rental business. Upon purchase of the apartments, the family moved from Japantown to live on 6th and Columbia in the apartments.   With any family owned business, it was expected that the children would help with all the chores and errands that were asked; your father’s words were final, you just did it.  The issues of discipline were very different from what we are used to.

The biggest change came when Takashi turned sixteen. His father, Sanjiro took him down to Sumitomo Bank and transferred all the accounts to Takashi’s name.  “Why did he do that?”  I asked.  Mr. Hori said that his father felt that at sixteen he should be responsible and do all the accounts.  One didn’t question your father, you just did it.  So, what were Takashi’s real feelings?  “mendokusai!” was his answer.  This means, “What a pain in the backside!”

1935 was the year Toyome graduated high school, the time they had promised to pick her up in Japan so she could come home to Seattle.  But, that was during the Depression when times were hard and money was scarce.  Toyo didn’t think they could manage to go.  However, Takashi cannot forget his father’s words.  “Who would break a promise to a child!  We must go and get her!”  So, demanding money from his accountant son Takashi, Sanjiro bought a ticket on the next ship to Japan to fetch young Toyome.  Takashi said he managed by putting off some of the bills and he also believes that his father had sold some of the land he purchased from his earnings in Hawaii.  But, upon bringing Toyome back to Seattle, the relatives in Japan had become so fond of her that a cousin had asked for her hand in marriage.  After only a few months at home, she headed back on a ship to Japan to be married.

6 thoughts on “Mr. Hori and the Panama Hotel – Part II”