Continuation from the series of Mr. Hori and the Panama Hotel: A Nisei Immigrant Story  Part I, Part II, Part III, Part IV

In early 1942, the US government plastered the telephone poles with posters stating that all Japanese living within a certain boundary were to report to the government office by certain date in March and the Japanese were to be evacuated from the city.  The Japanese newspapers also cooperated with the government because many of the Issei, Japanese immigrants, couldn’t read English.  No one  knew what was going on and because of this sudden announcement, there was obviously much confusion. The government had an office downtown where people could come and ask questions.  All they could do was comply, they felt like they had no choice.  There was no option of returning to Japan and where could they run to?  All they knew was that upon registering, you were told what could and could not take to “camp”.    In reality they weren’t allowed much, only what they could carry, that’s all.

With so little time between when the posters went up to the time of their departure date, many Japanese started to worry about their possessions.  No one knew if they would ever come back, which obviously caused a lot of anxiety.  In 1942, very few Japanese owned their home because real estate property wasn’t available to the issei.  Those that were able to purchase, did so under their children’s names, who were American citizens.  So, for the majority, their largest assets were cars.  While many sold their cars, some asked friends to look after them.  It’s really difficult to imagine what was going through everyone’s minds.  Here was a whole community who built their lives from nothing, who were living normal lives one day and then the next, they were told they had to give it all up in such unknown and unjust circumstances.  With no idea of the future, many felt they were left with little choice, but to sell and go.  There were those who ended up selling their business in a hurry, for next to nothing.  For Mr. Hori and the Panama Hotel, he said the equity in his business was so low, that if he sold it, he would come out with next to nothing.

Fortunately, he had friends at a local real estate company who offered to help him.  They hired a management company to run his hotel, while he was away.  But after a while, they wrote saying that they couldn’t make ends meet because they weren’t able to make enough money when they hired a manager to run it.  Instead, they suggested he lease it to someone who would run it like an owner operator.  That way they could charge a fixed flat fee, while the operators were able to run a profit.  This turned out to be a good decision.

As they were all trying to figure out what to do with their lives which were suddenly thrown into chaos, the owner of Ryokoken Café, Mr. Fujii, approached Mr. Hori to ask if he could store his things in the basement of the hotel.  Mr. Fujii decided not to sell but instead close his restaurant during their time away.  However, he had equipment, dishes, and inventory from the restaurant that needed to be stored.  It never dawned on Mr. Hori that his basement could be used for the community.  Once he agreed to let Mr. Fujii use the space, the employees from the Ryokoken Cafe came by asking if they could leave their possessions there too.  Gradually, through word of mouth, many families started to store their belongings in the basement of the Panama Hotel, and soon it was packed to the ceiling.   All the Japanese churches, such as the Nichiren Church and the Buddhist Church, also offered their space to their members.   I asked Mr. Hori if he recorded what people brought.  He said, he didn’t think about that at the time, but he did remember who left their possessions. It was all done based on trust as everyone was just doing their best under the circumstances.  After the war, the owners often remembered exactly where in the basement they left their belongings. 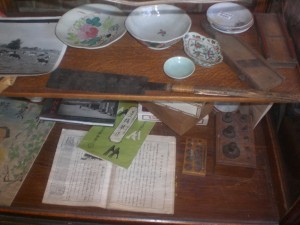 These are some of the items that were left in Mr. Hori’s basement and is now on display in the coffee shop at the Panama Hotel.  Some of the families never came back to pick up their items.  This puzzled me.  But, he said it was probably because they just wanted to move on with life and leave the past and those memories behind.  In fact, after the war, the fire department was going to fine the hotel because of all the items left in the basement.  However, Mrs. Hori was so kind hearted and said they couldn’t just throw everyone’s belongings out.  She ended up paying for a sprinkler system so that they could leave everything in place until the owners were able to pick up their belongings.

2 thoughts on “Mr. Hori and the Panama Hotel Part V”