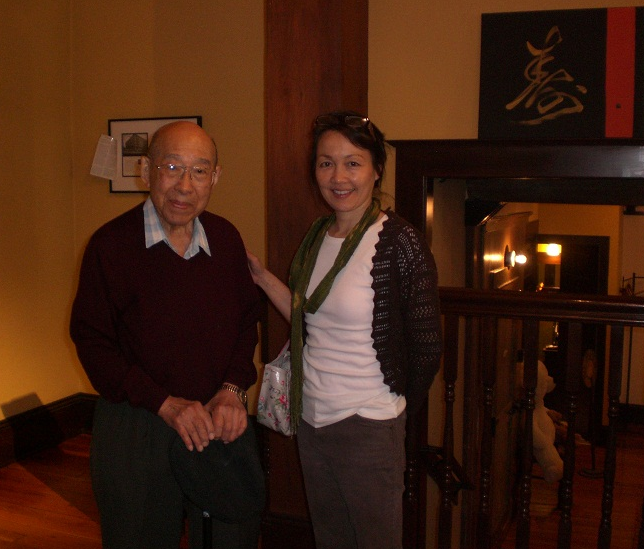 This is the conclusion of the series of  Mr. Hori and the Panama Hotel: A Nisei Immigrant Story Part I, Part II, Part III, Part IV, Part V, Part VI, Part VII

From Mr. Hori’s stories, I tried to imagine camp life in the middle of the Idaho desert.  Especially, this being the age of information,I wondered if being interned was like living in total isolation with no news from the outside world.  But, my assumptions were very wrong.

Mr. Hori informed me that with a population of close to 10,000 residents, the camp published their own paper called The Minidoka Irrigator.  It was published for the community and by the community.  In addition to this, they also had access to three other Japanese newspapers published in the U.S. ; from Salt Lake City was The Utah Nippo and from Denver there were the Colorado Times and Rocky Shimpo.

What puzzled me was how these papers were able to operate if Japanese-Americans were interned and the U.S. was at war with Japan?  Mr. Hori explained that not all Japanese and Japanese-Americans were interned.  Those living east of the Cascade Mountains in Washington State and those residing in states that were geographically inland from the West Coast were not interned.  The government must have thought that because of the great physical distance from the coast, those Japanese had little chance to access any significant information to pass on to the enemy.   Furthermore,  the chances of actually returning to Japan was close to impossible, therefore, they were not much of a threat.  Coming from Hawaii I somehow came to believe that all those with Japanese ancestry on the mainland were interned.  Now I know this wasn’t true.

The bulk of information from the newspapers consisted of American and local community news, with a few small articles of Japanese news, but not much on the war.  Once in a while the Utah or Denver paper had news from Japan obtained through shortwave radio that was printed in Japanese, but most was censored.

In camp, on the topic of war, there was disagreement amongst the internees.  The issei, (first-generation) were the Japanese born immigrants.  Most didn’t speak or read much English and were the older generation in the camp consisting of grandparents and parents.  They were Japanese and their thoughts were Japanese.  On the other hand, the nissei, (second generation) were born in the United States and most were educated in America.  Having never lived in Japan, their thoughts were more American. The kibei, (ki means return, bei means American) were born in the U.S., then sent back to Japan for their education and then returned to the U.S..

The issei read the Japanese American papers but most of their Japanese news was from the few shortwave radios which were really banned  in camp.  They still had great faith in Japan and believed the Japanese would win the war.  Upon receiving any new information, they would have runners who would spread the news from block to block.  In contrast, most nissei couldn’t read Japanese, so they kept up with news of the war through American radio and papers.  Both sides, the Americans and Japanese, claimed they were winning the war.  It was inevitable that the parents and children were often in disagreement.

Mr. Hori told me there was an opportunity for internees to apply for return to Japan.  A Swedish neutral ship, named Gripsholm, which he called an exchange ship, took the Japanese passengers from New York, to South Africa, then sailed up the east coast of Africa to India. From India, a Japanese ship picked up the passengers.  Most of those wishing to return were business men and their families who were in the U.S. on a short term basis with family back in Japan.  He knew a young girl who was engaged to a Japanese trading merchant who also went back on the ship.  Years later, they heard of the many hardships of those who returned as times were rough and food was very scarce.

Mr. Hori also knew of kibeis who were studying in Japan when the war broke out and ended up being drafted by the Japanese army.  They were teased and belittled in front of the other soldiers and understandably had a very trying time.  Some were able to return to America, but I never asked how they made it back.

In camp, there were many young, healthy men who were  were restless and instead of spending their days interned, decided to enlist in the U.S. military.  Most of these men ended up fighting in Europe with the 442nd battalion, one of which was Eddie Horikawa.  You can read Eddie’s story by clicking here.  The U.S. military was clever, for they knew that they had to send these men to Europe as opposed to Japan.  Mr. Hori stayed in camp, as being the first born son in a Japanese family; he had the duty to look after his parents.

They all tried to keep their lives as normal as possible.  The children went to school and kept busy with activities.  The men who stayed worked in and around the camp.  And the women had various clubs and activities to pass time.   The Japanese surrendered on September 2, 1945, and the Minidoka Camp officially closed on October 28, 1945.   Today, the camp site has become a historic site that you can visit.  If you are interested, please read more about the Minidoka: National Historic Site, which is now part of the National Park Service.

After the war, the Hori family went back to Seattle.  They were one of the more fortunate ones, as they were able to hang on to the Panama Hotel during the war.  However, getting their hotel back wasn’t so straight forward.  At first, those managing his hotel during their absence found the business to be quite lucrative during the war and refused to return the hotel.   Through the help of his long time friends from before the war, they were able to regain possession.  Slowly, life returned to normal and those who left items in their hotel basement came to claim their belongings.

The Japanese community began to rebuild their lives once again but Japan Town never regained the vital energy and activity it had before the war.  Today, the area is called the International District and has a wonderful blend of Asian cultures including Japanese, Chinese, Vietnamese, Filipino and other South East Asian countries.

After the war, Mr. Hori continued to run the Panama Hotel and later married Lily Morinaga.   They had two children Susan and Robert.  The Hori family worked and lived in the hotel until they sold their hotel in 1985.

Always the good Japanese son, after his father’s passing, Mr. Hori sent his mother to Japan for her grandson’s wedding.  She was happy to be able to spend time with her family in Kumamoto.  Her sisters, brothers, and relatives still lived close to one another and during her time there, they would enjoy tea and visit the local temples together.  A year later, Mr. Hori went to Japan to check up on his mother and bring her back to Seattle.  Finally, for her, after many years being separated from friends and relatives she was happy to be so close.  She realized she wanted to stay in Japan to be near her siblings.  So, he made arrangements for her to remain and went home to Seattle alone.  I’m sure she must have been truly happy and proud to have such a  good, traditional and responsible first born Japanese son.  Today Mr. Hori lives in Los Angeles with his daughter Susan.

I am most grateful to Mr. Hori for sharing his wonderful life story with me.  Not only fascinating and enjoyable, I believe it is part of our Japanese American history.  Here are a few photos I took at the Panama Hotel Tea House.  The Japanese mortar and pestle is called usu and kine.  This particular piece was made by Mr. Hori’s father, from a Japanese takuwan (pickle) barrel.  He poured concrete inside so it weighs a ton.  The kine or pestle was hand carved!  The tray was made by someone at camp, but he couldn’t recall who. The interior or the tea house integrates the old structure with photos and furniture that compliments the era and space.

This is the conclusion of the series of  Mr. Hori and the Panama Hotel: A Nisei Immigrant Story Part I, Part II, Part III, Part IV, Part V, Part VI, Part VII