In the U.S., nowadays you can find a fast food teriyaki chicken stand in most towns.  Teriyaki has become so common that they even sell the sauce at Costco.  On the supermarket shelves, there are a variety of teriyaki sauces that make our lives easier for their convenience and good taste.   But, because I grew up in Japan, I find the bottled American teriyaki sauces to be on the sweet side.  So, to adjust it to my liking, I often add Japanese rice wine, sake, to smooth out the flavor and dilute the sweetness.

First off, the word teriyaki comes from two separate words.  Teri means glaze and yaki means broiled.  In Japanese cooking, a teriyaki sauce is used for basting at the last stages of grilling or frying to give the meat or fish a savory soy flavored glaze.  It isn’t supposed to be used as a marinade.  Second,  traditional teriyaki sauce contains just soy sauce, mirin, sake and sugar and does not include ginger or garlic.  So, my recipe is not your traditional or typical teriyaki sauce, but in my opinion, it’s even better!

Do be aware that this sauce is quite different from the bottled version.  It doesn’t have any thickener, so it’s runny.  Also, it’s not as sweet as the bottled version and it has a clean and simple flavor.  You may adjust it by adding more garlic and ginger but with only four ingredients, it’s a cinch to make:  it’s just soy sauce, mirin which is a sweet Japanese cooking wine, garlic and ginger.  It’s best to grate the ginger and squeeze the juice then discard the fibers.   You can’t do that for garlic so just grate the best you can.  Please note that it will be somewhat lumpy but that doesn’t matter because it will burn off when grilling.

In our house, our favorite is to marinate chicken thighs and BBQ them on the grill.  In fact,  we just had a group of boys visiting and I used this whole recipe for a 6.5 lbs. bag of frozen chicken thighs from Costco.  First, defrost the chicken then wipe them dry.  In a container pour the whole batch of marinade over the chicken and let sit for half a day or  overnight and store in the refrigerator.   All you have to do is grill to perfection. If you have a small family, make one batch of teriyaki sauce and refrigerate the rest in a glass jar.   I hope you give it a try! 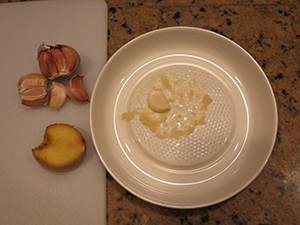 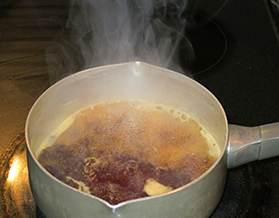