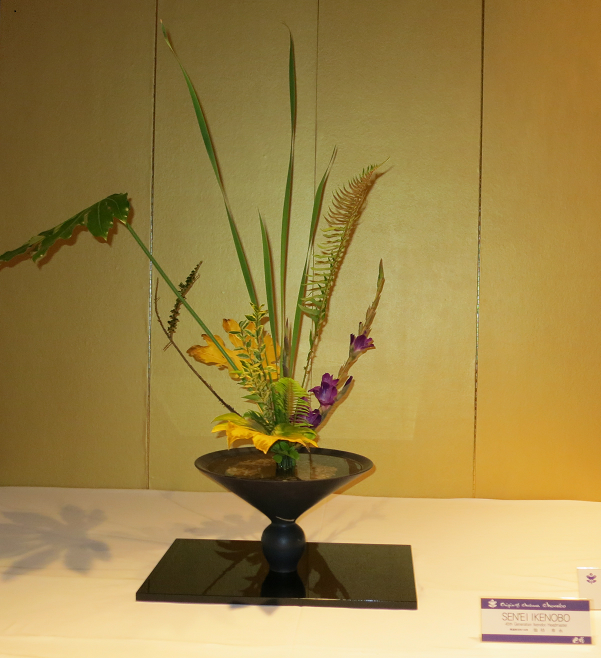 Ikebana, the art of Japanese flower arrangement has a history of over 500 years.  Last week my girlfriend invited me to a demonstration by the 45th Headmaster of the Ikenobo Ikebana School, Sen’ei Ikenobo.   He was in Seattle to help celebrate the local Ikenobo Lake Washington’s 10th anniversary.  This was a wonderful experience and a rare opportunity for those of us in the U.S. to see a Japanese ikebana master at work.

Ikebana has many different schools of thought and today there are  nine recognized schools in Japan.  Each school follows their own principles of how the flowers are arranged and what materials are used.    You can learn more about each school at Ikebana International, which has chapters all over the world.  But regardless of what school you practice, I love their slogan, “friendship through flowers“.  I do believe that there is no language barrier to appreciate the beauty of nature.

Ikebana, which literally means, “living flowers” is first thought to have begun from the simple offerings of flowers for alters at Buddhist temples.  It is said that Ikenobo, was the originator of ikebana.  You can learn more about Ikenobo Ikebana from their site.

Headmaster Ikenobo, is very charismatic  and entertaining man.  He began by explaining that his name, Sen’ei Ikenobo, is his real name printed on his passport.  This was mentioned because in the ikebana world, when one attains a certain teacher level, they receive a symbolic “teacher name”.  Many times it may include the name of a flower or may relate to your teacher.  Even non-Japanese teachers receive a Japanese “teacher name”.  Most of us would assume this was his “teacher name” so he wanted to clarify this.  From birth, we know he was destined to follow his family tradition and become the headmaster of this school.

Ikenobo originated from the days when flowers were arranged for a particular setting in a tatami room.  It was set in an alcove right underneath a scroll.  This meant that the flowers were viewed specifically from the front and always had a solid wall behind.    Therefore, from this tradition, ikenobo continues to arrange flowers to be viewed from center front.  Today, many other schools of thought differ from this approach, as they are often arranged with consideration to the space.   Ikebana is now enjoyed in all environments and many schools have adapted their philosophy to reflect this change.

Mr. Ikenobo told us a very interesting example of how one gives change from a transaction with a $100 bill.  For instance, in the United States if one purchases an item for $25.00, change is given using addition.  The cashier would start with a $5 bill and say “$30”, then add the remaining bills, saying “40, 60, 80 and 100.”  However, in Japan, the cashier would use subtraction and say, “your change is $75.00”.  It’s interesting to see how simple, daily actions can reflect the mentality of different cultures.  Using this as an analogy, in the West, flower arrangement is based on adding more flowers to a vase, while Ikebana  subtracts flowers to emphasize the space around the arrangement.   Though equally beautiful, there is great contrast in their approach to an arrangement.

The final part of the demonstration was a Reishiki-ike,  performed by another ikenobo master from Japan.  This demonstration is a formal ceremonial type of performance that is similar to Japanese tea ceremony, except arranging  flowers.  This is done on a red carpet, kneeling on the floor.  Each material whether flower, branch or leaf is treated with great respect and used to express its inner beauty.  As it said in the program, “observing the Reishiki-ike ceremony permits us to see beyond the beauty and harmony of the material and appreciate the process and spirit used to develop the ikebana arrangement.”  Here are the arrangements he made:

Here are some ikenobo ikebana arrangements that were on display.