Last week I got a sad email from Mr. Hori’s daughter, Susan.  Mr. Hori passed away at the age of 95.  My heart goes out to his children, Susan and Robert.  They took such good care of him and he always told me how proud he was of them.  Mr. Hori was such a vibrant, kind and wonderful man.  I will surely miss him.

On my blog, I wrote about my friendship with Mr. Hori.   Over tea and lunch, we spent hours talking about his youth and  life growing up in Seattle’s Japan Town during the 1930’s and 40’s and beyond.  As a Japanese American from Hawaii, I learned so much about the history of the Japanese immigrants who came to the Pacific Northwest.  You can read the series here:  Mr. Hori and The Panama Hotel – a Nisei Story.  His story is unique, in that it is the setting for the best selling fiction novel Hotel on the Corner of Bitter and Sweet.  But, his is a true story,  a part of our Japanese American heritage and I am forever grateful to Mr. Hori for sharing his stories to me.

According to Susan, “age had taken its toll and he had slowed down considerable, but was still able to go out and do things.  ”  In March, Susan and Robert brought him back to Seattle for the Kagoshima Kenjin Kai event.  At the same time, they visited the Panama Hotel Tea Room. ” The hotel was actually granted National Landmark status in 2006, but the government didn’t get around to presenting the plaque until 2012. The National Register plaque that had been given to Jan Johnson, the current owner, designating the hotel and Japanese baths as a historical monument. ” Here is the article:  Panama Hotel Receives National Historic Landmark Recognition

How wonderful that he was able to see the Panama Hotel as a Historic Landmark! 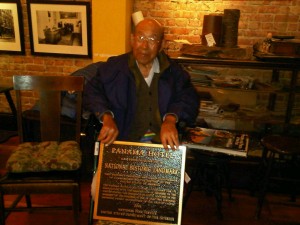 Susan wrote, ” Last weekend, he went out to dinner with my brother to celebrate Boy’s Day and had a large Japanese meal, including a shot of shochu.  The next morning, however, he said that he was too tired to get out of bed and then later in the day developed a fever.  We had a nurse come to see him and she gave him medication to lower his temperature, but his body just gave up the fight and he passed away on Monday.  It was very quick, unexpected, and fortunately he was in no pain.  And frankly, it was what he wanted.  Over the last 6 months, he increasingly said that he wanted to join my mother.   I was at home with him when he passed away.  We will miss him very much. “

Thanks to Susan and Robert for allowing me to share their precious stories of their time with their father.  Thank you Mr. Hori.

We will all miss this special man too.

3 thoughts on “Thank You Mr. Hori”