Crimea, Ukraine is an hour and a half plane ride from Kiev, a peninsula in southern Ukraine, located on the northern coast of the Black Sea.

As I’m geographically challenged, which often frustrates my extended family, which includes geography professors, I have included a map. You can see it protrudes into the Black Sea.  My poor sense of direction is like a family joke.  They say that if someone spins me around three times, I’m lost.  Don’t laugh; it’s not funny if you really are!  Okay, sorry back to Crimea. 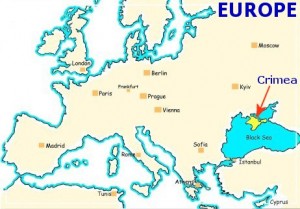 In the past, Crimea was a popular destination with the Russians, but not so much for the Ukrainians.  Apparently, nowadays, with more freedom to travel, the Ukrainians prefer to go abroad to places like Egypt or Paris.  However, there has been an effort to rebuild and promote the area.  Attendees to the event were pleasantly surprised at the beauty of Crimea and have new found appreciation.

After observing a map, Taras pointed out that we were near Yalta but closer to Alushta.  That name rang a bell :  the Yalta Conference in 1945, with Roosevelt,  Churchill and Stalin where they discussed post-war re-organization of Europe.  Upon recalling that, I thought, the place has a lot of history.  I wondered if it had good chi.

We stayed in a small town on the coast called Malyi Mayak, about an hours drive from the airport.  The hotel, Ai-Todor, is new with great views from the room and all the modern conveniences.  A definite recommendation!

Maybe due to it’s name,  I had this idea that the Black Sea would be black and therefore, muddy and not very beautiful.  I’m embarrassed to say how ignorant I am, but it was just the opposite;  serene, calm, with clear waters and just beautiful.  On a daily basis, we spotted dolphins swimming up and down the coast. 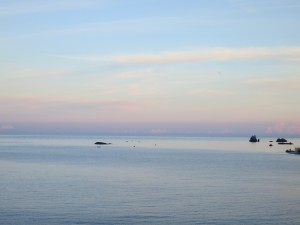 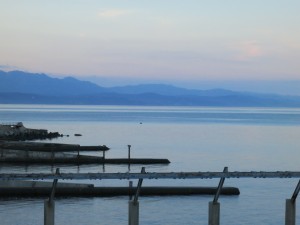 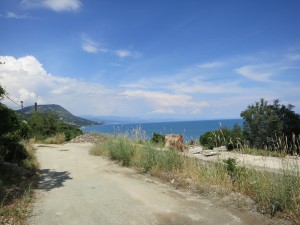 Coming from Hawaii, I’m used to white sand beaches, where your toes get covered in sand and your feet sink with your weight as you walk along the shore.  However, as my father is from the Big Island of Hawaii, I’ve also been to the Black Sand Beach that literally has black sand and is covered with lava rock.  The scar on my knee is a reminder when I fell on those jagged edged rocks.  But Crimea was something I never experienced.  The shore and under the sea is covered with smooth rocks, like river rocks, in every size you can imagine and no sand.  Walking along the shore is no easy task.  It’s like a natural reflexology foot path!  Yet, the reward was the water:   clean, crisp and wonderfully refreshing. 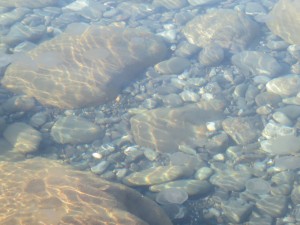 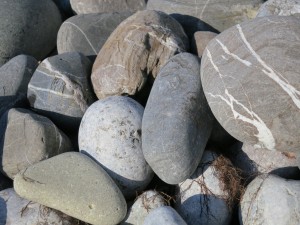 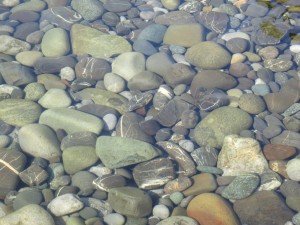 Dr. Hsu and I were there for the Blue Mountain Feng Shui International Mastery Program in Russian.  This 10 day program gathered over 65 students from the Ukraine, Russia, Latvia and Belarus.  After mingling with the students who spoke some English, I came to learn that many have a great interest in psychology, spirituality, and ancient eastern culture.  They go to India and China to learn about yoga, vastu, meditation, martial arts, qi gong, medicine and many other physical, mental and emotional health traditions.  They are very open to such information.  I found, more so than in the West.   I wondered why.

My husband was telling me about his studies on permaculture.  They found that those interested in these types of topics are children and the older generation.  During our ‘middle’ years, we in the West are just too preoccupied with work.   There leaves little time for anything other than living and raising our family.  I think that’s true.  Even for myself, after twenty plus years, we’re finally empty nesters and I’m enjoying these new discoveries.

The 10 day program began with individual introductions.  Through our fabulous interpreter, Tanya, we came to learn each person’s story on how they managed to find themselves at the program, and what drove them to come.  Many came because they had just read Dr. Hsu’s book, The Medicine Box, which was recently translated into Russian.  They said they just had to meet him, they felt a strong need.  If you read the book, you understand that need.   If you are interested in exploring the mystical world of ancient Chinese knowledge and wisdom it’s a must read. 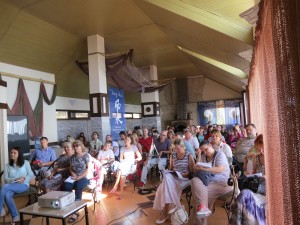 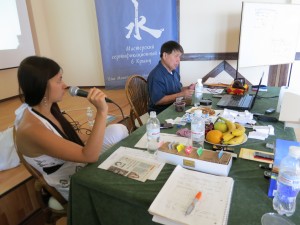 There were people from all walks of life including business owners, graphic designers, interior designers, healers, qigong teachers, tea connoisseurs,  teachers, managers, those interested in becoming feng shui consultants, those looking for love, those looking for direction and those just wanting to learn.  Regardless of the reason, I believe that if we were there together, we were meant to be there, it’s our karma.

Dr. Hsu is a man of many talents.  He is a tai chi master as well as a feng shui master.   Nearly forty years ago, he was the first Tai Chi Chuan instructor in the Pacific Northwest.   Being a modest man, he also rarely mentions his extensive background in qigong knowledge and how he personally knows many of the qigong masters in China.  We knew we were all privilege to be there with the master.

The sun rose at 5:00 a.m. and many of us, myself included, just got up.  No alarm.  And we weren’t groggy but alert.  With views from our rooms we enjoyed the sunrise over the sea.  Under his leadership, our days began with an hour long early morning exercise class in the open air, next to the Black Sea.  The large sky, endless sea and open space were an ideal environment to raise our chi levels! 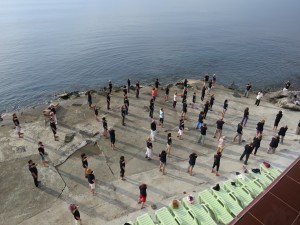 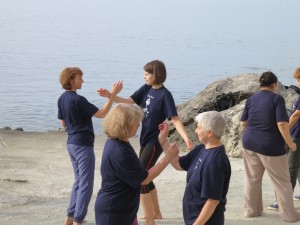 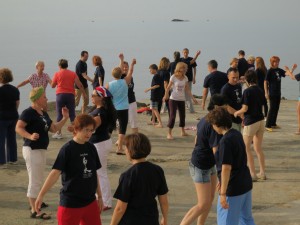 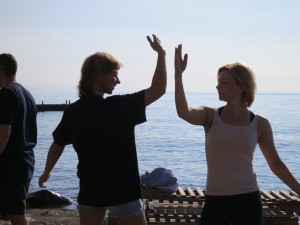 Throughout the program, we did a combination of qigong exercises, tai chi push hands and even learned the exercises that correspond with the Chinese healing sounds.  As Dr. Hsu always mentions, such exercises and practices must be simple and easily woven into our lifestyles.   If not, we tend to make an initial effort but along the way we often lose interest and stop, because it requires too much effort.  Many people drive to the gym and work out, which is great.  But, it often doesn’t last a lifetime.

Instead, these simple movements and exercises can be done at any age, at any time, with little effort.  To continue these exercises is the key to long life and good health.

Our daily schedule in Crimea included the morning exercises and two three hour sessions of class time per day, plus an evening segment of discussion and meditation, often ending at about 10:00 p.m. every night.   The schedule also included a ‘siesta time’ of 3 hours to accommodate those who brought along other family members.  This allowed them some vacation time to enjoy the weather and water with their loved ones.

For personal reasons, I had to leave early.  Our son was graduating from college and I couldn’t miss that.  But, over the course of a week, I must admit, that I could feel the bond and energy rise – there was an abundance of group chi.  The site, the people, the weather all seemed to come together to make a most memorable time. 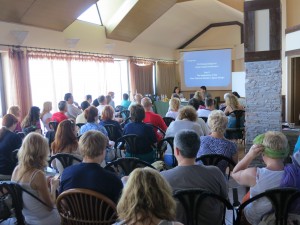 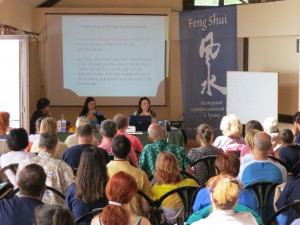 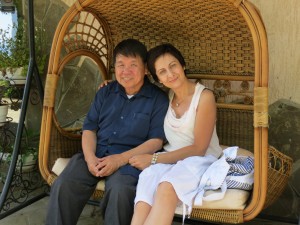 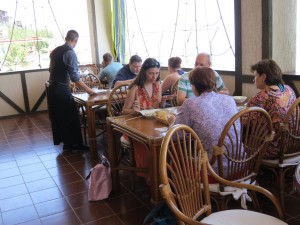 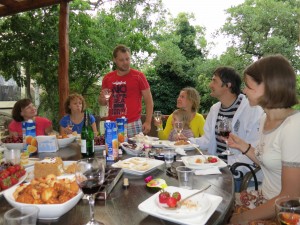 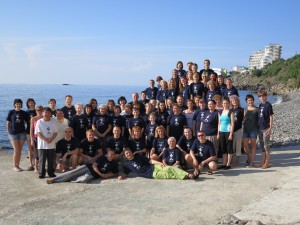 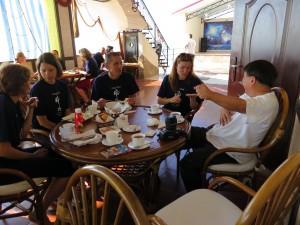 We were all able to connect with one another through our shared interests.  I also enjoyed trying the local food and managed to have a different dish every day.  I am fond of beets so you can imagine that I am a fan of Borsht, beet soup.  The beet salad, blended with a tangy dried fruit was also delicious.  Most of the other fare was pretty standard.   They don’t use many spices and the use of garlic is minimal.  As a student of form school, I do look at the form.  I noticed a lot of their foods are cooked in the shape of medallions and are often dipped in sour cream.  The shape is yang and the food is yin?  Hmm…wonder what Dr. Hsu would say to that.  I’d imagine he’d say, “don’t stretch it”, meaning don’t trying to place theory where theory doesn’t belong… 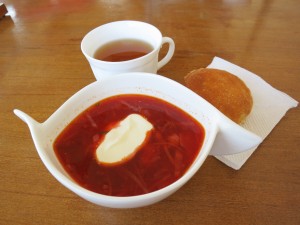 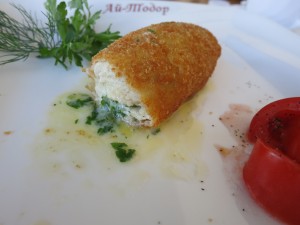 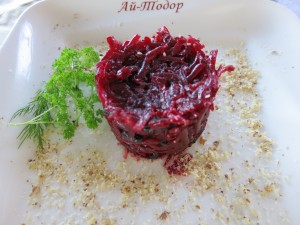 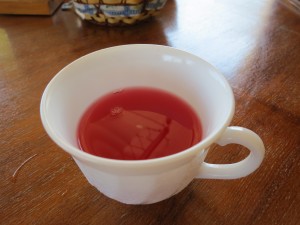 I have been blessed meeting all the wonderful people including Taras, Dasha, Lora, Tanya, Denis, Larisa, Tanya, Nellya, Peter, Misha, Andre and everyone else.  Upon my return, Dr. Hsu also presented me a gift from the class.  A custom handmade wool vest, made by a special artist without the use of any tools.  It is just beautiful and I love it! Thank you so much for your thoughtful kindness and for a most memorable time.  As they say in Ukraine, placiba, thank you. 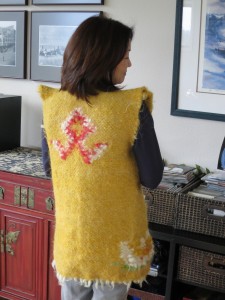 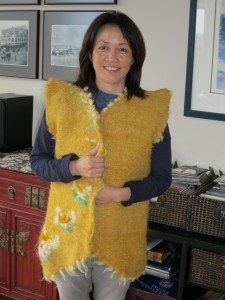 And last but not least, thank you to Dr. Hsu, who has spent his lifetime learning and teaching the true ancient knowledge of China that will benefit us throughout our life.  As Taras summed it up perfectly, “Master Hsu is a real Master – so many secrets, and his depth is immeasurable, no words to describe his talent.” 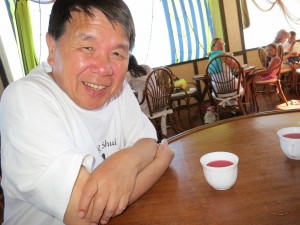