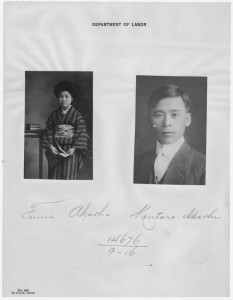 The first Japanese immigrants to the United States came in the late 1800’s.  Like my maternal great-grandparents from Hiroshima, most were farmers searching for better opportunities, mainly in hopes to make a buck abroad and to go home to a better life.  But, life had other plans for them.  Many never made it back to Japan.

Most of these Japanese immigrants were single men.  Traditionally, in Japan, the first born son inherited the family home, business, and property.  This meant that all the other males in the family were left to find their own fortune.  These men were the typical immigrant farmer.

One thing that I find fun is that some Japanese named their sons according to their birth order.  The first born son was “Ichiro”  ichi means one, second was “Jiro”  ji or ni is second, “Saburo” san, is three, “Shiro”, shi is four, “Goro” go is five…..”Hachiro”  and hachi is eight, etc.   So, just from the name, you knew what number son they were!  This meant, there were probably very few Ichiro, who immigrated.

Lacking the money to return to Japan, eventually, these single men wanted to settle down and have a family.  Their only option for a bride was to have some sort of arrangement from Japan.  Those with family back home had help in seeking a bride.  The relatives or a go between called a nakkodo, would arrange a marriage with a suitable family.  Usually, these arrangements were based on family wealth or status in society.  It included the exchange of family history and a photo or picture of the potential bride and groom.  This is the Japanese picture bride.

In those days, many of the brides had very little say on the matter.  If their parents thought it was the best opportunity for their daughter, she was sent away.  For our generation, it’s hard to imagine the feelings these women went through.  Going to a different country that you had never been too, without knowing the language and meeting your future husband that you don’t even know!  Sorry, I don’t think I could do that.  These were very tough women!

The picture bride would be sent on the ship to America with a photo of her husband in hand.   At the other end, the groom would be waiting at the dock her picture.  My mother said in her generation, that was the norm for most of her friend’s parent’s marriages.  Growing up she heard stories that some felt tricked because the groom sent a photo taken when he was much younger.  Upon meeting, the bride was shocked to find an elderly man.  Others complained that their spouse showed no resemblance to the photos they were given.  Japanese just accepted their fate and moved on.

My mother’s parents were unusual.  Her mother came to Hawaii as a young girl of fourteen with her parents.  All three of them worked the fields.   After several years, they managed to save enough money to go back home to Hiroshima to buy land and farm.  But, during their time in Hawaii, her mother met a man and she decided to stay.  Their romance was unusual in those days.  My great-grandparent’s accepted her decision and left for Japan without their only daughter.

As it happens, my father’s mother was also not a picture bride.  For some reason, it didn’t happen in our family.  That’s considered quite unusual for that generation.

1 thought on “The Japanese Picture Bride”