Chinese Pollution is a Reality

The Chinese have a wonderfully rich culture that I love to learn about and I’ve always dreamed about visiting the country.  My only concern about going there is the pollution.  Growing up in Tokyo, I remember we had really bad days of pollution.  I don’t know how they cleaned it up, but it got better as the years went by.  Now that we live in the Pacific Northwest, we are blessed with lots of trees and greenery.  We take all this clean air for granted now.

Okay, China is a very big country and every city is different.  But, in general the air quality in major cities compared to  U.S. major cities is in the “dangerous” zone.  A friend of mine knew of someone who went there for a three month stay in Beijing.  At his next physical, the doctor asked if he was a smoker.  He wasn’t, but the only thing he could think of was the pollution during his visit.

How do I know that the pollution in China is a real issue?  Well, our son is currently in China studying Mandarin.  He is in a city about 280 kilometers southwest of Beijing, called Shijiazhuang.   Like all parents, we are concerned for his well-being, and this is the video he sent us.  It was taken from his apartment window.  The visibility is bleak to say the least.  Then below is a photo on a clear day, taken from his school.  Well, at least I know they do have clear days! 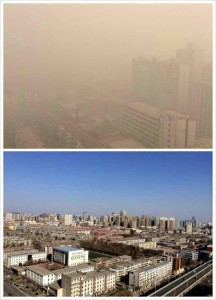 To keep fit, joined a health club  because he couldn’t go running outside.  Well, the other day, he pushed himself and did a hard workout.  It’s rather ironic because instead of feeling better for exercising, he ended up feeling nauseous.  He complained that his lungs hurt.  I really don’t know what that means, because I never had my lungs hurt. But he said it was like putting pressure on his lungs.  He believes the air quality was a major factor for this pain.

Pollution is such a major concern that the International School of Beijing built a dome so the kids could play “outside.”  According to MSN news,  this is one of two domes they have, each costing $5 million to build!  No wonder a friend of mine who has two sons and currently lives in Beijing wants to return to Seattle for their middle school education.  Not being able to ‘go out and play’ seems so sad.  They can’t explore nature and everything they do is in a confined space.  On the other hand, what about all the other children in polluted environments who don’t have a “dome” to play in.  Does this mean they are limited to indoor activities year round?  What are we doing to the future generations.

I know we can’t blame any country or person for all this pollution.  We all contribute to it in some form or another.  My only suggestion would be to consume less and to plant trees and grow indoor and outdoor plants.  Nature has the amazing ability to clean our air and water.  According to the American Forests “clean air and clean water are products of our forests.   A single tree can absorb 10 pounds of air pollutants a year, and produce nearly 260 pounds of oxygen-”  We need to protect our forests.  But on a personal level, let’s go out and plant a tree or grow some plants.  And as Dr. Hsu always teaches us, plants are living angels.  Every small step counts.

4 thoughts on “Chinese Pollution is a Reality”