As I love and appreciate Japanese Design, this a book review. Japanese design and sensibility is complex and difficult for many to grasp. Yet, the book Japanese Design  — Art, Aesthetics & Culture by Patricia J. Graham has managed to capture the essence of Japanese art and aesthetics through a deep understanding of the culture and traditions that has evolved through influences of social and economic changes.

The book is categorized into three chapters, The Aesthetics of Japanese Design, The Cultural Parameters of Japanese Design, and Early Promoters of “artistic Japan” 1830s-1950s.  As a student of both chado and ikebana that integrates many of the visual arts, I appreciated the selection and range of images that which support her explanations, include not only two dimensional art but architecture, porcelain, religious artifacts, everyday objects, and gardens.

Initially, however, I found the irregular placement of the images a distraction while reading the text.  Although, I know that it has nothing to do with the context of the text, I wish the layout was a little more visually organized. Maybe a bit more thought on layout would have given the reader a better experience, in this regard.

The first chapter, The Aesthetics of Japanese Design, is categorized by Japanese aesthetic terminology, such as wabi sabi and iki.   Such terms are very challenging subjects that even native Japanese have difficulty explaining.  Graham manages to perceive the underlying spirit of these terms, indispensable for those interested in Japanese art.

I also love that she has a section for mingei, just because it’s something that I am always attracted to.  Mingei, or folk craft, are found in many towns throughout Japan.  They are often simple in design, made with local materials and have superior craftsmanship.  Most of these items are common everyday objects, such as obento boxes, miso soup bowls, spoons, and furoshiki.  These items weave Japanese art into daily lives.  For me, observing and appreciating art is one thing.  Handling, using, and integrating such art into your lifestyle is another.  I believe it makes life more fulfilling.  Folk craft somehow has the chi to lift your spirit.  Unlike mass produced products, mingei hin, or folk craft carries the energy of the village.  We feel a connection to the place and it becomes part of our life.

My favorite is the second chapter, The Cultural Parameters of Japanese Design.  Having lived most of my formative years in Japan, I was pleasantly impressed with Graham’s understanding of the subtle nuances of the culture and tradition that is often difficult to comprehend.  One such example, iemoto seido, rings very true.  She is right to express how this system “may sometimes lead to conservatism, it would be wrong to think that it stifles innovation. “

Iemoto seido or, master system is when there is an appointed master of a school who carries on the traditions and teachings.  Many traditional arts such as tea ceremony, ikebana, Kabuki and No, still follow this system.  Under the master there are assistants, apprentices, and students of various forms, who learn, practice, and continue on the traditions.  Such lineages are carried on often through family or by appointment.

Under this system, there are many social rules that one is expected to know.  As a Japanese American and now living in the States, I am often confused by what rules apply and what rules are forgiven as we are not in Japan.   Regardless, such unspoken rules of how one should conform under this system are simply accepted in Japan.   Students who cannot conform understand that to pursue their own vision, they must have the courage to break away to establish their own school.

The last chapter looks into Western collectors of Japanese art.  Although this was the least favorite of mine, it was good to view things from a different perspective.   And I am grateful that these collectors managed to preserve and spread the beauty of Japanese design to the rest of the world.

Sometimes, they say when outsiders appreciate your art or culture, it makes you look twice.  And suddenly, you see new found beauty through fresh eyes in what you have always taken for granted.  I think Graham has done an outstanding job of capturing the essence of her subject.

This book, Japanese Design, is truly a treasure of information and adds another layer of appreciation to Japanese art—a must for anyone who has a passion for anything Japanese. 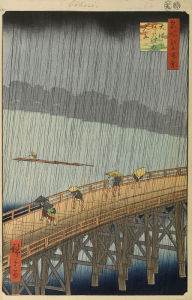