How One Tea Ceremony Taught Me So Much About Appreciation 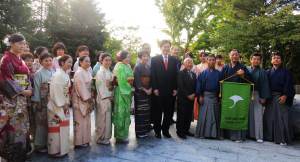 Seattle’s Sister City in Japan is Kobe, the capital of Hyogo Prefecture.  To deepen the relationship between the two cities, they often have cultural exchanges.  This fall, the Hyogo Japanese Tea Ceremony group visited Seattle to increase cultural awareness.  It consisted of a group of young women who are learning tea ceremony accompanied by their adult mentors.  These events are also a wonderful chance for those of us living in the U.S. to learn many things about Japanese culture and how it’s changing.

As a student, when I attend chado, tea ceremony, lessons they are often centered around the discipline and the technique of the art.  This is true in any class environment.  Just as when you’re in a beginner painting class, you start with learning techniques on drawing, color, shadow, composition and so on.  Basic techniques are the first step to learning anything.  Similarly, with tea ceremony, lessons begin with simple techniques such as walking and sitting .

Yes, we have to learn how to sit. One of the fundamental aspects of tea ceremony requires one to sit on the tatami floor for long periods of time.   Now that may sound very silly.  Everyone knows how to sit, so why is this something that must be learned?

In a traditional ceremony they don’t sit on a chair.  They sit on the floor, but not in the usual position of crossing your legs. The Japanese way of sitting on the floor, called seza, requires folding your knees under your bottom. This is actually quite difficult if you’ve never sat in this position before.  It’s also difficult if you’re not very flexible or have bad knees.  As a beginner, when sitting in this position after about five minutes, often your feet will get pins and needles.  Once you feel numb, standing from this position can be difficult.  With beginners, it’s not unusual to wobble and I’ve seen some people even stumble.

As with anything, it just takes practice.  When I first started learning tea ceremony, I could sit on the floor for only about five minutes, after which the pins and needles started to kick in.  To practice, I would watch T.V. sitting on the floor in this seza position.  Gradually, I could watch a 30 minute show, without any trouble.

What I’m trying to get at is that lessons, or okeiko, are often based on technique and discipline and you are a student.  On the other hand, at an actual chakai or tea ceremony you are a guest.  The host, on the other hand, makes their utmost effort to entertain the guests so they have an enjoyable time.

For part of their cultural exchange, the Hyogo Tea group hosted a tea ceremony event and I attended as a guest.  In a traditional tea setting, there are only a handful of people that can fit into a tea room.  But at these events, with a much larger crowd, it’s similar to a demonstration.  There are a handful of “guests” on the tatami mat while the rest of us observe from a distance on chairs.

There were two tea sittings at this event.  The first sitting was on the floor of the tatami mat.  The other was done on a chair with a traditional table.   In tea ceremony, the selection of utensils reflect the occasion and the thoughts of the host.

I had always thought that all tea ceremony items were pieces of art and were very expensive.  But, at this ceremony, they taught me how wrong I was.  Yes, there are most expensive tea utensils that cost over $10,000.00 for a tea bowl, but it doesn’t have to be.  To explain his point, the host said that they went to Macy’s the day before to buy a bowl for the occasion.  It was a colorful ceramic fiesta bowl that cost $6.  Then he shows us the tea scoop.  The tea scoop was carved by a Buddhist priest from the local temple in Japan.  The temple had to replace a 2,000 year old post.  Instead of just throwing it away, the priest used the wood to carve many tea scoops and gave it away as gifts.  The post was given a second life through this tea scoop, visited Seattle, and still lives on for all of us to enjoy.  After the ceremony, I went to observe the utensils and gently took the scoop into my hands.  It was light as a feather!  Roughly carved, full of character, it had a wonderful energy and I felt honored to have had the chance to hold it in my hands. 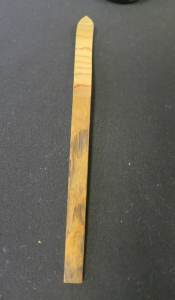 The tea master taught me that tea ceremony is a ceremony to enjoy the beautiful things in life, but also that each and every utensil is important and should be treasured regardless of price.   And more importantly, it was most evident that the hosts put so much thought and care into not only entertain us with such a beautiful ceremony, but at the same time teach us about the true spirit of tea.  I find that learning cultural disciplines have a much deeper meaning than what we see on the surface . They also teach us how we can apply this to our daily lives.  With much appreciation and gratitude, thank you to the Hyogo Tea Group.