I love to share art and culture from Asia.  This is a guest post by Amandine Dowle on Korean Crafts exhibited in Milan.  Aren’t they beautiful?  I’d love to have one of those meditation bowls in my home!  I wonder what they would sound like….

After the success of the exhibition devoted to Korean crafts in 2013, the Milan Triennale, a showcase of great international artists, is welcoming the second edition of this important event. Its value is even bigger, since 2014 coincides with the one hundred and thirty years of relationship between Italy and Korea. The exhibition was inaugurated during the Milan Design Week, a one-week event gathering the most important designers as Fontanot, Marteen Baas, or even Werner Aisslinger. In this article, we will showcase three artworks. 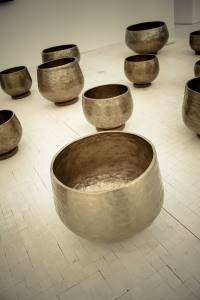 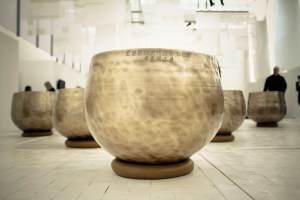 If it is true that for sixty years the master Lee Bong-ju worked brass with a blazing furnace at 1,300 degrees, then we can call him and define himself as the “master of fire.”

The huge brass vessels vary slightly in size, with the largest at  42 cm high and 59 cm wide.  They are the product of his creativity and silent wisdom that have been forged through his work in all these years. The time given for beating the piece when it’s glowing is about 30 to 50 seconds. He hits objects without stopping to be able to provide a clear and majestic sound. 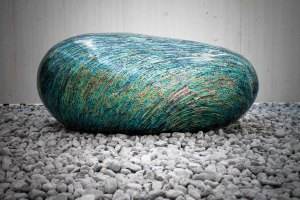 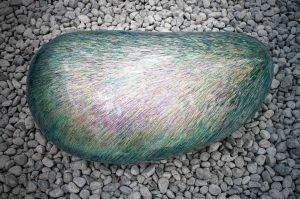 The idea of “Pebbles,” a work created with inlays of mother of pearl, was in reality coming from the artistic director Sohn Hyewon.  For the realization of the “Pebbles”’s basic structure, the master went to the river Hongcheon, in the Gangwon province, where he gathered 30 small and cut stones. Among them, he also selected 10 with the help of the art director Sohn. He then enlarged some photos taken of the stones in order to create a complete simulation of the final result of the inlays of mother of pearl. L: 90 cm, l: 50 cm, H: 36 cm 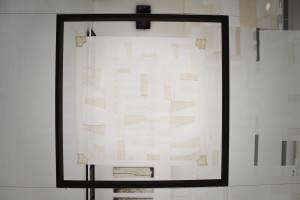 In the village of Hansen, when the work day is finished, the women sit at the loom and begin to weave ramie. Every day, thread after thread, they are contributing to the sustenance of their families and in their work they express all the joys and pains that they feel. The master Bang Yeon-ok, elected at UNESCO says: “For a skillful craftsman, it takes three months to produce the thread of ramie necessary for a strip of fabric, and about 10 days to weave the strips themselves.” In the moment in which the fabric of ramie is cut to make a dress, the pieces that remain are certainly not discarded. These are in fact collected with a high aesthetic value.

Both Korea and Italy don’t miss resources. They have rich cultural tradition, a strong sense of hospitality and great love for art that represent their great potential.

Amandine Dowle is a French fashion and design photographer.  She has lived in New York, Ottawa, Greece and now resides in Milan.  In addition to photography, Amandine also writes articles for design and fashion publishers.