The Cultural Perception of Tattoos or Irezumi in Japan 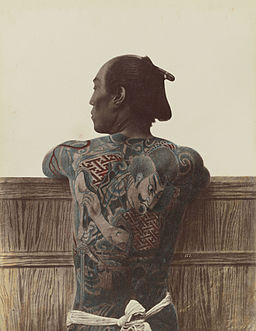 My very limited knowledge of tattoos comes from my experience of growing up in Tokyo.  In Japanese, the word for tattoo is irezumi, 入れ墨。The first two characters together, ire(ru) means, to put in, to place or to insert.  The second, sumi, is ink.  So, it’s the insertion of ink.

During the Meiji era, tattoos in Japan were mostly seen on members of the Yakuza, the Japanese mafia.  Back in the 1970’s, when I was growing up, the only knowledge we had of the full bodied yakuza irezumi came from samurai movies.  It was very easy to decipher the good guys from the bad guys.  Those covered in ink from the shoulders down were the bad guys.

In many T.V. and movie scenes, these characters usually wore loosely wrapped kimonos and had a disheveled look.  When a scuffle would erupt, they would yell obscenities.  Next, the kimonos sleeves would come off, proudly exposing their naked chests adorned with intricately designed colorful tattoos.

Like many traditional Japanese movies, there was always a bit of over acting. The bad guys would show their irezumi, holding a pose for the crowd to admire, like a kabuki moment.

Because the process for irezumi was known to be long and extremely painful, it was also a symbol of endurance, manhood, and strength.    Everyone feared the men in ink.  So, one glance of their tattoos, and the fearful crowds would immediately disperse. 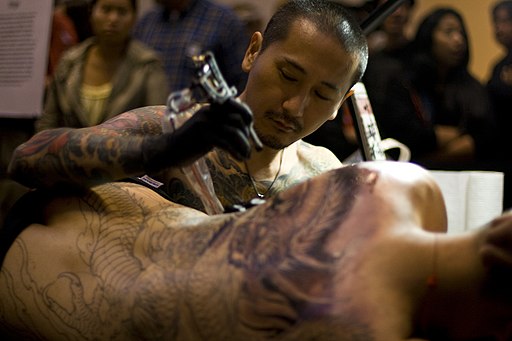 So, my impression of tattoos stem from these old Japanese shows.  Being a child at that time, I found such colorful drawings on the body to be “scary”, not beautiful works of art.  That’s probably because I connected irezumi to the yakuza and their role of intimidation.  Its no wonder my thoughts were mostly negative.

Today, my perception of tattoos have changed dramatically because of how it has evolved with the times.  Now, regardless of gender, it’s widely accepted in the states.  To many it’s a statement and something very personal and beautiful.  Even the Japanese irezumi is now appreciated as a work of art.  However, in many places in Japan, unfortunately it still carries a negative image.

My Japanese girlfriend, who just got back from visiting family in Tokyo told me that some public bath houses ban those with tattoos.  For me that was quite surprising to hear.   Sounds like the negative cultural perception of tattoos still exists and maybe even going backwards? I know from experience that thirty years ago, there was no such ban at the bath houses.

My manager and I often had day jobs in the countryside.  Before catching the bullet train back to Tokyo, if time permitted we’d often stop off at the local onsen or public bath.  After our job, we’d hop in a taxi and would ask the driver to take us to the closest public bath.  Upon going to our respective baths, we’d arrange a time to meet outside.  For us, this was a wonderful treat and a very relaxing way to end the afternoon.

One day, as we sat in a taxi heading to the train station, my manager shared the experience he just had at the bath house.  He told me that it was full of yakuza.  Instead of a relaxing soak, he had a stressful time making sure to keep his distance.  He didn’t want to cause any problems and avoided eye contact, minding his own business.  He was clearly intimidated.   Who wouldn’t be!  So, I know they were allowed in back then.

I remember one thing my manager told me about the effects of a full bodied irezumi.   He said it lowers the body temperature.  Maybe scratching the epidermis causes this.  I don’t know, but it would be interesting to ask if this were true.  According to him, because they often felt cold, the yakuza were known to wear haramaki, which is fabric wrapped around the stomach area to retain body heat.  It’s like a scarf around your middle and it really works!  And no wonder they loved the onsen bath houses.  They really warm you to the core.

I do hope that the Japanese public bath houses will change their perception and policy on tattoos and allow everyone.   It’s time to move forward and rethink the cultural perception based on the past.