Me, the city girl is moving to the country.  As my sister said, “who would have ever thought that you would live in the country.”  How true.  You just never know in life.

I’m a city girl, raised in the middle of Tokyo, in a place called Nishi Azabu.  I grew up with subways, buses, trains, and taxis, as one does in a big city.  When I started working, I commuted on those crowded subways and trains of Tokyo.

Okay, this video is a bit extreme, and I didn’t go through that every day.  But they really have train attendants pushing and squeezing people into the train cars before the doors close.  Surprisingly, you do learn to switch off and pretend that you are not a sardine.  You sort of psych yourself that you are really minding your own business even though you are between masses of strangers.   I guess I really don’t miss those days.  But, we enjoyed all what the city had to offer.  The job, night life, the entertainment, the restaurants, and all the excitement.  I loved Tokyo and still do.

After Tokyo, we moved to Singapore.  A much smaller city, but still very urban.  Then Kuwait city.  Yes, it’s a city but felt more like a suburb.  Then we came to the States to the suburbs of Seattle.  As you can see, although just by coincidence, the transition was from big city to smaller and smaller cities.

Now, after living in the suburbs of Seattle for fifteen years, my husband, Robin, and I finally became empty nesters.  The kids are gone and probably won’t be coming home to live.  The big house that was always so full of activity and life became a lonely empty shell.   Along the way, we went through some life changing experiences.  Some of which really affected our perception of life.

The more I studied feng shui and living a life according to nature, the more I wanted to simplify my life.  By coincidence, in parallel to my studies of feng shui, my husband became interested in permaculture.  Permaculture comes from permanent agriculture.

If feng shui principles are tools to help us design structures and spaces that support our lives following natural laws, permaculture follows the same principles designing landscapes.  It’s agriculture  modeled after nature, designed to take advantage of nature’s qualities to create sustainable farming.  Simply put, he wanted to follow his heart and become a sustainable farmer.  So, as my direction of design started to change toward simplifying more and more, Robin’s desire for living a life of growing vegetables, kept increasing.

When feelings such as these pull at your heart, it really becomes hard to ignore.  The fact is you can’t look the other way.  So, we finally took the plunge.  We sold the house and started the search.

What can I say.  We thought finding the perfect piece of land would be a breeze.  Honestly, now I can admit that we were extremely naive.  It’s been stressful.  But, I’ve come to terms with this and realize that this is a process.  We’ll get there, but it’s a process.  The best part after about a year and a half has been that we found an adorable little house in the town we want to live in. We’re still working on the rest of it.  But, I’ll keep you posted.

So now I will be blogging from the country, in a town called Enumclaw.  It’s about an hour or so from Seattle.  If you go to the City of Enumclaw website, they say it’s the “Gateway to Mt. Rainier”.  Mt. Rainier is the highest mountain of the Cascades in Washington state.  Mt. Rainer is also known as Mt. Tacoma and Mt. Tahoma.  Visually, it’s a beautifully proportioned mountain and even in summer it has a white cap.  The older generation of local Japanese have nicknamed it “Tacoma Fuji”, because it reminds them of the famous Mt. Fuji in Japan.

From a feng shui perspective, mountains are metaphors for support.  I like the fact that the first generation local Japanese had a deep affection toward Tacoma Fuji.  It must have reminded them of home.  I also feel as though it’s keeping an eye on me and supporting our vision.  On a clear day, it’s just breathtaking.  Here’s a picture I took while driving by one day. 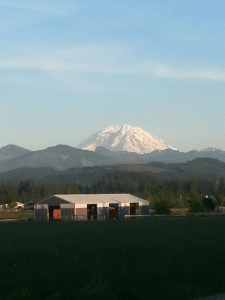 Our move is in line with feng shui principles because being in farm country will support what Robin will be doing.  Change can be difficult, but change is also a form of new experiences.  And as Robin always quotes Mahatma Ghandi  “Be the change that you wish to see in the world.”

Finding ways to support a more holistic type of lifestyle will be part of my ongoing goal.   As I continue to follow my passion of Asian culture and lifestyles, I look forward to sharing this with all of you.  And thanks for your support.