Omiyage, the Japanese Custom of Gifting 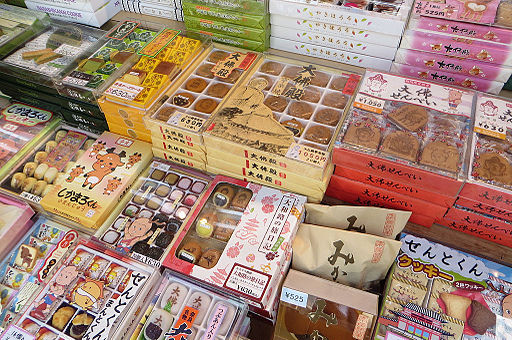 Omiyage, is the Japanese custom of gifting that is ingrained in our culture.  When we are invited over to someone’s home for a meal or any occasion, we often bring food or a small gift for the host.  Gifting is a part of many cultures.  This was very apparent when I met my Persian girlfriend.  When our family moved to Kuwait, my son was invited to his first play date and I was invited too.  Being Japanese, I couldn’t go empty handed so I brought a bunch of grapes.  My Persian hostess was surprised because she said that is something a Persian would do, but she wasn’t expecting it from other cultures.   That day we both realized how similar Japanese and Persian cultures were and we became friends for life.  But, back to omiyage.

The meaning of omiyage is a little broader than a hostess gift.  In Japan, when one goes out of town, it’s customary to bring back a little souvenir, memento, or food item for family,  friends and co-workers.  We call this omiyage as well.  Now, because it’s ingrained in our culture, we do it not only because we sort of “have to”, but because we “want to”.

It’s a way to say, “we’re thinking of you” and it’s also a way to share your experiences of your travels.  Omiyage helps you remember your travels, such as when and where you bought the small gift.   And in a way it forces you to check out all the shops!  It’s great for tourism.

In Japan, the most common omiyage is food.  When I was working as a young girl in a Japanese office, we’d often go out of town for work.  We made sure to pick up an omiyage for our co-workers.  Usually, it was some local Japanese rice cakes or sweets sold at the train station.  The above photo shows the different types of local sweets that are individually packaged and boxed so you just have to pick it up and go.

Although there is no written rule about omiyage, if you didn’t have anything for the office, it’s often thought of being inconsiderate and selfish.  Most Japanese wouldn’t say anything to you directly, but they’d probably mention to others that you weren’t raised right.  Yes, they don’t blame you, they blame your parents!  But because it’s so ingrained in our culture, no one thinks twice about getting an omiyage or not.  You just happily do it.

The culture of omiyage has also contributed to many positive things.  Many towns strive to have a food specialty item called Meibutsu, that becomes part of their identity.  For example, when my husband and I visited Nagasaki, they had their specialty noodle, Nagasaki champon, everywhere.  It becomes a huge commodity for that district.  My other favorite was the kamameshi sold at the Nagano train station. This is a mixed rice dish served in traditional pottery.  If you go to a town known for a particular food, you just have to have it.  It’s similar to here in the states.

In Hawaii, everyone buys macadamia nuts, pineapples, coffee, and tropical treats.  Here in Seattle it’s salmon and cherries.  All these items make great omiyage.  So, next time you see a bunch of Japanese tourists at the local shops buying little knickknacks and goodies, you know they must be buying omiyage!