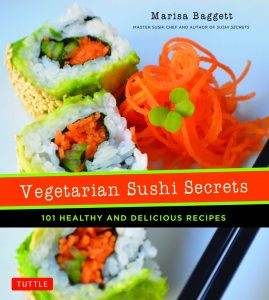 In Japan, the traditional vegetarian sushi fillings are cucumber, kampyo, which is a dried gourd cooked in a sweet soy based sauce, shiitake mushrooms, takuan, eggs, spinach, plum, shiso and sesame seeds.  I really do enjoy them all.  But, sushi is now not just a Japanese food.  It’s everyone’s food.

It’s just like pizza.  The base of the Italian pizza is that lovely dough.  It can be thin and crisp or thick and chewy.  But regardless of which way you like it, the dough is the canvas.  This has allowed the people’s culinary imagination to soar.  And today we are all that much more rich with the endless combinations of delicious pizza!

I never really thought that sushi could be a blank canvas.  Not until I tried Vegetarian Sushi Secrets, 101 Healthy and Delicious Recipes by Marisa Baggett.  This post is a review on Marisa’s new book.

Marisa seems like the most unlikely sushi chef.  She’s a young black woman from a small Mississippi town, who owned a restaurant and catering company.  One day someone requested sushi for a private party.  She said yes.  The only problem was she had never had sushi before!  Boy, that takes guts, doesn’t it.

That’s the beginning of her sushi journey.  She somehow wings it and slowly her clientele keep asking for more.  One day she gets a reservation for a group of twelve from the next door town.  He walks in with eleven men from Japan!  She’s mortified and locks herself in the bathroom.  That’s when she decides that she was really going to learn how to make sushi and eventually, finds herself in L.A., going to sushi school.  And I guess the rest is history.  This is her second sushi book.

So, I opened Vegetarian Sushi Secrets and started looking through her American sushi recipes.  Hmm… interesting…I’ve never imagined that you could put pickled okra into a sushi roll.  Some of the combinations were just so out of my Japanese comfort zone, that to be honest I was a bit leery about trying something.  But I believe it’s always good to get out of that comfort zone.  You just never know what you will experience.

That night for dinner I had two hungry men waiting anxiously to try very original vegetarian sushi.  First was the Mushroom “Spider” Rolls.  Spider rolls is one of our family favorite, so I had to give this a go.  The traditional spider roll has soft shell crab tempura and can include avocado, cucumbers, fresh greens and spicy mayonnaise.  Instead of the usual soft shell crab, Marisa substitutes Japanese mushroom tempura, shimeji and enoki, wrapped in nori.  She combines hers with cucumber, daikon, lettuce and her faux roe, which I didn’t make.  The second roll I decided to challenge was the Ginger Beet Rolls.  Ginger and beets are two of my favorite foods.  But, I never really thought about combining them together let alone in sushi!  That was a must try!

Now, I’ve been making homemade sushi rolls for years.  So for those of you who have never made sushi at home, you must be prepared to spend a few hours getting all the ingredients ready before you roll.  It also helps if you have the right equipment, like a sushi wood bowl and sushi mat.  For the beginner sushi chef, the book has plenty of images of Japanese ingredients.  It also has a section on sushi equipment.  This is great guide if you don’t have experience with Japanese food or cooking.

Regardless of what kind of sushi you make, it does takes a lot of prep work.  You have to cook the rice, season it, let it cool.  Then you have to cook, chop and prepare all the fillings and organize them in separate dishes.  Once you have all your ingredients ready, then you finally assemble the rolls.  It helps to be a little methodical and patient.   But, the wonderful combination of flavors in sushi will make it all worth while right?

With much effort, I f 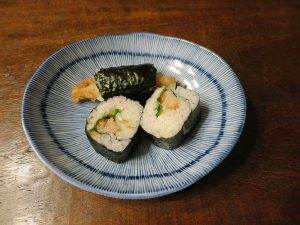 inally had made the sushi!  These are my rolls.  The “Spider” rolls were a bit hit with Alex.  He said he’s never tasted those yummy mushrooms before.  The flavors blended very well.  And tempura makes everything taste good.  Her idea of using the mushrooms were visually similar and very innovative. 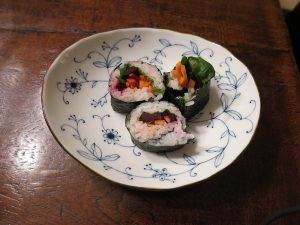 Next were the Ginger Beet Rolls.  While rolling, I was very skeptical.  There was a lot going on here.  Lemon rind, grated ginger, carrots, beets, and watercress all dipped in ponzu, a soy based citrus sauce.  So, I popped one in my mouth.  My first words, “Wow! It really works!”  The sushi rice has that subtle sweet and sour flavor that enhances the slightly sharp ginger and the fragrant lemon to enhance the beets.  They melded into a wonderful burst of clean fresh flavors, very different from what I’ve ever tasted.  At that moment I became a fan of Marisa’s sushi and am looking forward to trying more.   To Marisa and all those original chefs out there, I say thank you and keep going!  I’m rooting for you!  And for you sushi lovers, why not experience a new take on sushi?  Here is the recipe for the Ginger Beet Rolls. 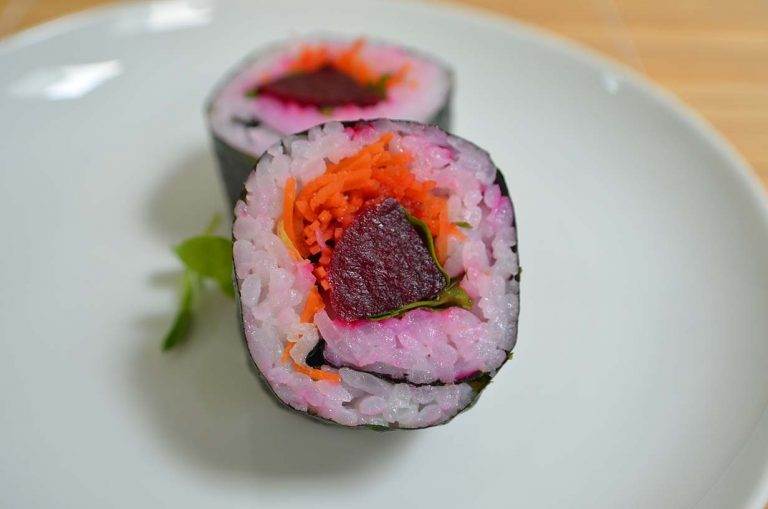