What is the Best Direction for the Front Door? 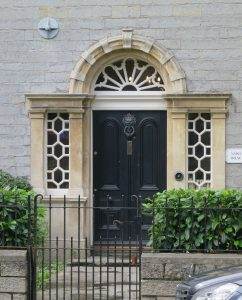 This question is from one of my readers.  It’s also a very common question that I get often.

What is the best direction for the front door?

Depending on the culture in Asian countries, often many say that a front door facing East or North is more auspicious than facing West or South.  In form school feng shui, there are two main considerations that dictate the best direction.

1. The geographic and climate considerations
2. The actual environment surrounding the structure

1. The Geographic and Climate Considerations
In ancient China, many believed that having the home face south was auspicious.  This is because in China, the Emperor sat in the north and faced south when ruling the country.  Because of this, south-facing came to imply power and command.   This influenced other buildings in the community such as palaces, temples, and government buildings, to all face south as well.

During the winter months, in colder areas in the northern hemisphere, we want more sun.  Therefore, universally, in these areas, not just in China, we want to face south.  In Japan, we often hear people say they look for homes or apartments that face south.  We all crave to have a sunny home.

Living here in the Pacific Northwest, long gray days from October to June are the facts of life.  This winter we had record rainfall and lots of gray skies.  It can get a bit depressing.  So here, the sun is a BIG deal.  When the sun does break out, I find that facing south and getting as much light and warmth makes a huge difference not only to the home but to my whole spirit.  It’s literally and figuratively a “ray of sunshine”.

You can now understand that the emphasis of facing south is based on Chinese culture as well as the geographic and climate considerations of northern China. But what makes sense in northern China doesn’t necessarily mean it’ll make sense in other places around the world.

For example, many hot climates often deliberately avoid facing south because of too much sun. Being from Hawaii and having lived in Kuwait, I can say this is true.  Instead of craving the sun, local people in hot climates look for shade under the trees and awnings to keep cool. In such climates, we know that long exposure to the sun causes a lot of damage to the home and it’s furnishings.  The sun fades everything including paint, furniture, window coverings, flooring and more.  In Hawaii, we keep the blinds down to keep the sun out!  Too much of anything is not good.

2.  The actual environment surrounding the structure

What do I mean by this?  If you insist on having a front door face a particular direction you can run into many problems.  Normally a house faces the road, which means the front door faces the road.  Although this is not set in stone and there are many homes that don’t face the road, most do.  So, if you dictate your choice by facing a particular direction then it really limits where you buy a home.  Also, that means, that all those other people that face in a different direction would develop some sort of issue.  So, many times the front door is really dictated by the site location, road, path and the landscape.

In form school feng shui, more important than the direction of your front door, is to make sure you observe and consider your geographic and climate environment.  Also, remember to consider the real physical environment.  By following these points you will know if the front door is in the best location for your home.

4 thoughts on “What is the Best Direction for the Front Door?”