The Feng Shui of the Seattle Mariners Baseball Sculpture

Safeco Field is the home to the Seattle Mariners baseball team.  Located just outside of the field’s left gate stands an iconic bronze… 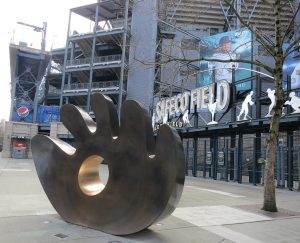 The Mitt is a beautiful 9 foot bronze sculpture of a catcher’s mitt.   Observing the side view, the mitt is about a foot thick and is slightly concaved.  The large rounded and stubby fingers of the glove has very gentle pleasing curves.  In the palm of the mitt, just a little off center, is a round hole.  The smooth bronze metal surface and the overall form is very warm, inviting, and appealing.

When our boys were young, we attended the games, passing by the sculpture.  It’s just right outside the entrance, so during the season, there are crowds mingling around the area.  Kids were touching and interacting with the sculpture, often climbing through the hole.  Parents with cameras and phones in hand would be taking photos of their children with their heads poking through this hole.  I love when art becomes part of the community welcoming us to make it a part of our lives.  From this perspective, it is a very successful piece.

Then I wondered, what is the feng shui of the Mitt?

In feng shui we say, “Form defines energy.”  So this analysis and observation is based on the Mitt’s form.

As we know, the main function of a baseball mitt is to catch the ball.  A baseball mitt’s large leather surface is designed to accomplish this.  However, this “Mitt” sculpture has a large hole in the middle.  The ball passes through the mitt.

I don’t know the intention of the artist.  Maybe the hole represents the ball.  Or not.  When I looked at his other sculptures, they also had similar holes.  Maybe the hole is his signature design.  I don’t know.    But, from a feng shui perspective, it does imply that the ball goes through the mitt.

So, here’s our feng shui question:  Does this sculpture with a hole in center of the mitt affect the team?

Let’s see what the statistics tell us.

Unfortunately that glorious year was an outlier, and since 2001 their form has returned to the pre-1995 level of lower than mediocre, with a record of 6 winning seasons out of 15.

Given that baseball as a sport is famous for its superstitions and sensitivity to its surroundings it is really surprising that nobody seems to have even considered the Mitt as a potential source of negativity. While “hope springs eternal” in the breast of every Mariner fan at this stage of the new season, maybe it is time for some creative thinking.

Maybe we could loan the Mitt out to some deserving cause. Like the Yankees…

Kidding aside, what would be a good remedy?

Why not block the hole with thick leather netting?  This design solution will still allow you to see through to the other side but at least it would stop a ball from passing through.  Hey Mariner fans is this worth a try?