Asian Folklore of the Red String of Fate – Akai Ito 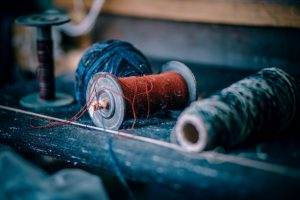 Do you believe in destiny? Do you think you have a soulmate?

In Japan, it is believed that some of us are destined to be with a particular partner in this life. An invisible red string connects your fingers together. This is called the red string of fate. In Japanese, they say, “Akai ito de musubareteru”.

When I was a young single girl in Tokyo, I came across this phrase for the first time. A colleague of mine was dating here and there, but never seemed to have a “serious” boyfriend. Then one morning she arrived at the office with excitement. Well, something was definitely different. Her energy was high. You could just feel it bursting out of her skin. For this post I’ll call her Yoko, because all my friends would know who I was talking about.

The night before, a group of her friends, who lived in her neighborhood went out for a beer. On a whim, Kana decided to invite her husband’s friend because she thought that he had a lot in common with Yoko. Apparently, Kana was absolutely right. This guy and Yoko had so much in common, they couldn’t stop talking until 4:00 a.m. in the morning!

Yoko said it was like they already knew each other. Then she said the phrase, “akai ito de musubareteru” , “we are connected with the red string of fate”.

She knew at that moment, he was the one. And sure enough, they got engaged a few months later. I thought it seemed really soon for her to rush into marriage, but they were both so sure. And they were right. They have had a solid marriage for thirty years.

Maybe not all of us are that fortunate to find that invisible red string connection with our “soulmate”.

But, the red string can also connect you with your child, colleague, friend, or parent. I feel connected to many people I meet on a daily basis. Although there may not be a red string, I do feel we are all connected and believe there is a reason why we meet.

Are you connected to someone with an invisible red string of fate?