The Simple Act of Sweeping to Clear Your Mind 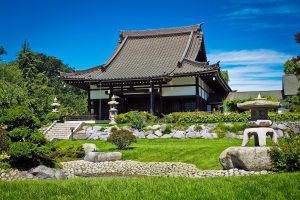 Regardless whether we enjoy it or not, we all have to clean house.  I’m a little bit particular about my kitchen.  Even if the rest of the house is in shambles, I like to have a clean kitchen.  For some strange reason, if my kitchen is messy or dirty, I just can’t seem to think straight.  I know it’s a bit weird but that’s the truth.

One day, I was wondering about the life of a Buddhist monk.  You see my master, Dr. Hsu, was an aspiring monk during a young phase in his life.  He lived in a monastery for a couple of years.  I never asked him why he left.  I should ask him that.  I was always fascinated by monks and their lifestyles.

In only the last ten years or so, I found out that my father also had a connection to a Buddhist temple.  Growing up in a small town on the Big Island of Hawaii, the educational system was very limited.  His father was a scholar from Japan and decided to send him to Hilo, the largest city on the island, when he was in junior high, in hopes of a better education.  Apparently, the monk at the Hilo temple was a distant relative.  So, my father ended up living at the temple for two years.   He said there were several boys living there with him.  They would have to do chores around the temple like cleaning and sweeping.

Whenever I have an image of a temple, I envision a monk sweeping.  It’s a very simple yet meditative act.  So, I thought, that’s what I should do:  sweep every morning, like the monks.  My reasoning was that the repetitive simple physical act of sweeping would help me sweep my mental garbage from the day before, so I could start the day with a clean slate.

It’s been about six months since I started sweeping.  Every morning I  clear the previous nights dishes.  Then I go and grab the broom.  Our kitchen has a tile floor, so it’s easy to sweep in an organized manner.  I just sweep one tile at a time.  It’s become a habit now.  Once I’m done, I feel good about the clean floor and I’m always rather surprised at how much dirt and food particles have accumulated in just one day.

We don’t have a huge kitchen, so it takes no time, but more importantly I found that the simple motion of sweeping is relaxing and meditative.  I don’t mop everyday, but this little daily ritual seems to have a positive affect on my mental conditioning. So for now it’s a keeper.

Give this a try.  Tell me if sweeping helps you clear your mind too.  I’d love to hear someone else’s results.